Brer Rabbit Falls Down a Well

A retelling of a Georgian Folktale

Brer Rabbit, Brer Fox, Brer Coon and Brer Bear wanted corn for roasting. They decided to work together to plant a big garden of corn. They would start the next morning when it was a bit cooler for working outside. 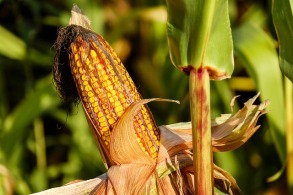 The next morning, they all got busy, raking and digging. The ground was hard as a rock, and it was difficult work. Soon, the sun was beating down on them.  The heat made Brer Rabbit extremely tired.

“I don’t want anyone to call me lazy,” he said to himself. So even though he wanted to rest and take a nap, he kept working. He hauled away branches and debris. He was exhausted, hot and tired of working so hard.

“OUCH!” he yelled so all the animals could hear.  He looked at his paw and stuck it in his mouth. “I’ve got a pricker in my hand!”

“You’d better get that pricker out of there and wash that hand right away. It’ll get infected,” said Brer Fox. He had been watching Brer Rabbit and wasn’t sure that there was a pricker in his paw.

“You’re right,” said Brer Rabbit with a slight grin on his face. “I’ll go do that right now.”

Brer Rabbit hurried down the road, looking for a soft, shady spot to rest. Soon he came upon an old well. It was in the shade, and an empty bucket hung from the top of it.

“Well, well,” said Brer Rabbit. “This looks like a great spot for a nap.” And he jumped into the empty bucket, thinking of how wonderful it would feel to sleep in the shade.

“Whoa,” said Brer Rabbit, hanging onto the sides of the bucket as it plunged down into the well. The bucket of water sped past him, water splashing out of it and onto Brer Rabbit as it sped towards the top of the well.

SPLASH! Brer Rabbit’s bucket landed in the water at the bottom of the well. It bobbed left and right, up and down as he hung on for dear life. He had no idea what he was going to do next.

“Heh, Brer Rabbit,” shouted a voice down into the well. “What are you doing down there?”

It was Brer Fox. Brer Fox knew that Brer Rabbit didn’t have a pricker in his paw and had followed him to the well. When he saw Brer Rabbit jump into the bucket and head downward into the well, he wondered why. Brer Fox thought that maybe Brer Rabbit had money hidden in the well.

“Are there a lot of fish down there?” asked Brer Fox, wondering if the tricky rabbit really fishing was.

“Oh, my, yes, there’s plenty. Can you come down and help me?” Brer Rabbit shouted up from the bottom of the well.

Now Brer Fox didn’t know if Brer Rabbit was really fishing or if he was down in the well, counting all his money. But Brer Fox sure wanted to find out.

“Well, how do I get down there?” asked Brer Fox.

“Just jump in the bucket, and it’ll bring you down,” said Brer Rabbit. He knew that Brer Fox was much bigger than he was. 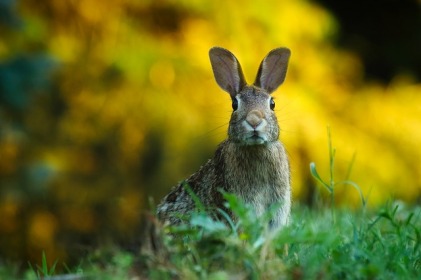 Brer Fox jumped into the bucket, and immediately, it plunged down into the well. He hung on for dear life as the bucket carrying Brer Rabbit sped by him toward the top of the well.

“Goodbye,” shouted Brer Rabbit as he passed Brer Fox. “You’ll be safe at the bottom of the well.”

Brer Rabbit jumped out of the bucket when it reached the top of the well. He saw a hunter coming down the road.

“A hunter is coming! He’s probably going to stop to get a drink. He’ll pull you up to get a bucket of water, but you’d better run away fast.” Brer Rabbit shouted down the well to Brer Fox. And off sped Brer Rabbit, down the road to the garden.

When the hunter pulled up the bucket, Brer Fox ran as fast as he could to the garden where Brer Rabbit was already hard at work, digging and hauling.

They worked hard all day. Once in a while, they would look at each other and laugh. They must have looked so silly tumbling up and down in the buckets of the well.

Hope you enjoyed the story.