What do you think of when you look out the window and see snow falling?

But did you ever think of using snow to keep you warm?

Snow is a great insulator. An insulator is a material that stops heat or sound from being lost or transmitted. Who would use snow as an insulator?

Many animals, such as bears and groundhogs, spend the winter in snow-covered dens. Because the snow acts as an insulator, it helps to keep the den warmer.

But why? Snow is made up of snow crystals and air. In fact, there is a large amount of air in snow. Especially freshly fallen snow and snow that is light and fluffy. These air spaces make snow an insulator because the heat gets trapped in the air space. It can’t easily travel through the snow and be released to the outside.

Think about a jacket made of down. The lightweight feathers are fluffy and have a lot of air space between them. The air spaces make it harder for your body heat to escape from the jacket, keeping it trapped inside and keeping you warmer.

Humans have used the insulating power of snow for thousands of years. The Inuit build igloos where they can live in warmth and comfort while the wintery weather rages outside. 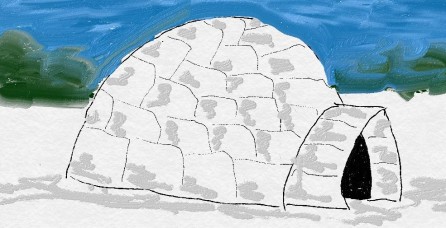 People that live in snowy environments have used snow to insulate their houses in the winter. Sometimes they “bank” the snow up against the foundation of the house to seal the heat inside. Sometimes they build a snow fence around the house, put a layer of hay around before the snow falls, and then pack the snow onto the hay, creating a snow “wall” of protection.

Here’s some questions to think about: