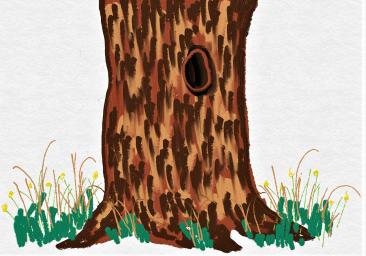 A retelling of a Brazilian tale

This week’s theme is trees.  There are many folktales and legends about people and/or animals falling asleep under trees. Here is a retelling of one of them.

This tale begins with the same daily routine for a boy named Uaica.

“You are too weak and small for us to hang out with,” said the boys to Uaica. “Go away!”

Uaica turned, heading into the forest. The boys in the village teased him every day about his size and his lack of strength.  But Uaica was very sickly and couldn’t help that he was small and weak. He lived with his loving grandfather who tried to protect him from the cruelty of the boys in the village. But his grandfather couldn’t be with him all the time. Uaica often went to the forest, just as he did on this day, to find protection and peace among the trees.

Suddenly, Uaica came upon a tree with many animals asleep at its base. The animals normally did not like each other, but here they were, asleep together, predator and prey. As Uaica walked towards the tree, he began to feel sleepy himself.

“I can’t go to sleep with all these animals. They will surely wake up and start fighting with each other, or with me,” he said. But he was so sleepy he plopped down among the animals and fell instantly asleep.

While asleep, he had a dream. Jaguar Man, son of the Jaguar, came to visit him.

“I am Sinaa, and I have come to share with you my secret powers of healing.”

For many days, Uaica went to the tree and slept, all the while learning from Sinaa, how to use the secret powers of healing. But Uaica was not eating and he wasn’t sleeping. He was growing weaker and smaller every day.

“You have learned enough for now, “said Sinaa. “Go home and do not return. If you do, you many never leave this tree again.”

Uaica’s grandfather was worried about him. “You must eat, you are getting sicker. What has happened to you?” he asked.

Uaica took his grandfather to the tree but he himself did not go near it. He kept his promise.

When they walked back into the village, a woman came running up to them.

“Casimiro is very ill. We think he might die,” cried the woman, who was Casimiro’s mother.

Even though Casimiro was one of the boys that teased Uaica every day, he healed him. Everyone in the village was shocked that he had such powers. The boys stopped teasing him, and life got much better for Uaica.

In a dream, one night, Sinaa said to Uaica, “You kept your promise and stayed away. Come back, and I will teach you more secrets.”

Sinaa taught Uaica many things and the villagers became more amazed at what Uaica could do, and make.

The villagers became jealous of Uaica and all the things he had. They plotted to steal his beautiful objects. But Uaica had learned from Jaguar Man how to see all things, and he saw the villagers hiding behind his house.

“Why would you steal from me when I have been so kind and good to you?” Uaica shouted. And suddenly, he was gone, disappearing into a deep fissure in a rock nearby.

The people of the village never saw Uaica again, nor had the benefits of his healing powers.

But people say that if you are a compassionate and giving person, he may visit you in a dream and share some of his knowledge with you.

Have you ever fallen asleep under a tree? What dreams have you had while sleeping there?